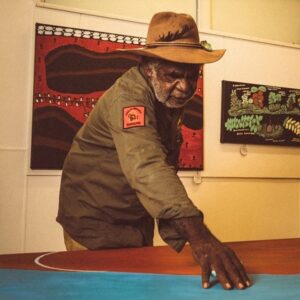 Jack Green is currently Borroloola’s most widely celebrated artist. He was born in the early 1950s under a Coolibah tree on Soudan Station on the Barkley Tablelands, Wakaya country. He is a Mambaliya man, Garrwa on his father’s side and Marra on his mother’s side.

He grew up on cattle stations, travelling with kin for ceremonies, and settled in Borroloola in the early 1970s. He was the founding coordinator of the Waanyi Garrwa Rangers, under the Northern Land Council, and is now their Senior Cultural Adviser.

Jack first started painting as a powerful way to share his experiences of the operations and impacts of mining companies and government policy on the region’s peoples and their country; but has since gone on to explore a wide range of cultural and political themes.

“I want to show people what is happening to our country and to Aboriginal people. No one is listening to us. What we want. How we want to live. What we want in the future for our children. It’s for these reasons that I started to paint. I want government to listen to Aboriginal people. I want people in the cities to know what’s happening to us and our country. I want the government and mining companies to know that we are still here. We aren’t going anywhere. We aren’t dead yet. We are still here, feeling the country”.