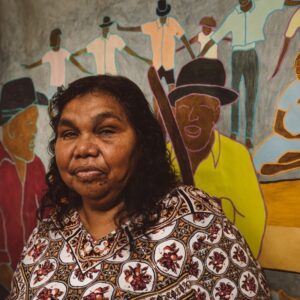 Marlene Karkadoo (nee Timothy) is from The Rrumbarryia Clan group who are the traditional owners of Borroloola.

Marlene’s father was a senior Yanyuwa saltwater man – a dugong hunter, and her mother was from Garrwa country over to the east of Borroloola on the Queensland border. She was born on the banks of the Robinson River at Seven Emu Station in the Gulf of Carpentaria.

The stories that Marlene paints are the stories that were told to her by her parents and grandparents about life on country, and a particular focus is ceremony and song.

Marlene is the local coordinator for the annual Malandarri Dance Festival and divides her time between art-making, her coordinator role and also governance responsibilities for a number of community and council organisations.

Marlene is also a broadcaster and worked for the local radio station for 13 years before she made the move to visual arts in 2009.