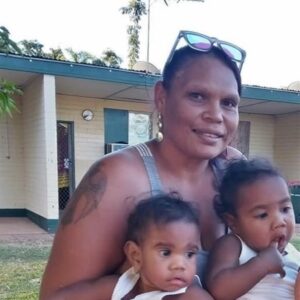 Joni Wanmunmara Wilson is a Garrwa / Yanyuwa woman.  On her father’s side of the family she also connects to Gudanji people. As a child growing up on country Joni was very inspired by her grandfather – (the late) Milyindirri Gordon Lansen.

Gordon Landsen was a founding member at Waralungku Arts and one of the foremost artists. His distinctive landscapes and dreaming’s are widely celebrated and still appear as licensed reproductions on a range of merchandise, and in a number of notable areas across Australia (most notably, Qantas planes). Joni recalls as a child, that while he was painting “…he would tell us kids to finish off some areas that he needed to complete the painting – he was a big inspiration and encouragement to us”

Joni was also inspired by her grandfather Jimmy Pyro Didyalma (her mother’s father). Jimmy made cultural artefacts at his home and would include his grandchildren in the making process. Growing up as a child Joni would sit around the campfire and listen to the cultural stories of her people – these are what inspire the content of her paintings today.

Joni paints bold, bright works which symbolise cultural ceremonies, practices and stories. Joni is the daughter of senior artist, teacher and Garrwa leader, Maria Pyro. She has grown up with sound teaching of both cultural preservation and art practice and talks to her on a daily basis to get advice and support.