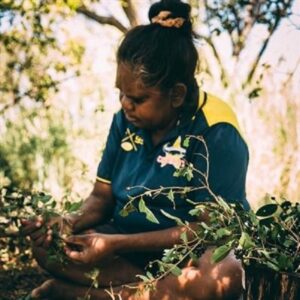 Margaret Douglas is a Wardaman woman who grew up in her country south-west of Katherine. She is married to a local Yanyuwa man and is raising her family with her husband in Borroloola.

Margaret’s work has a combination of influences – her totems and stories from Wardaman country, but also local stories that have become central to her life as part of a large and extended Yanyuwa family.

Margaret’s Mother-in-Law is (the late) Jemima Miller who was an accomplished painter at Waralungku Arts, and inspired and encouraged Margaret to begin her painting career.